According to Goodreads, I read 53 books during the first half of 2019.

Stalin: The Court of the Red Tsar – Simon Sebag Montefiore

This book by historian Simon Sebag Montefiore is a stomach-churning read. My main takeaway is the extent to which Khrushchev was nothing more than a mini-Stalin, I had always, lazily, assumed he was a ‘not-as-bad-as-the-rest’ guy but no, he was no better than Stalin, awful men, a terrible regime.  And how dispiriting it is to see the shadow Chancellor, John McDonnell MP, standing under a banner of Stalin (and Mao) only this May. 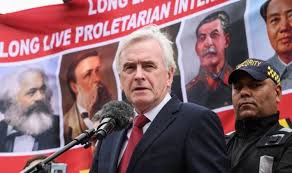 Moving from the ridiculous to the sublime.  Polish officer and artist Józef Czapski gave a series of lectures on Marcel Proust to his fellow officers while waiting imprisonment and likely death in the Soviet gulag. A beautiful, haunting book that pays testament to the human spirit and the power of literature to sustain and impart meaning.  The perfect counterpoint to the Stalin book.

I read this as part of a ‘readalong’ set-up at the Eiger Monch & Jjungfrau blog.  Lucky Per is a beautifully composed , powerful novel, a classic of Danish literature and well worth your time.  Written and published in eight volumes between 1898 and 1904 the book follows the life of Per Sidenius as he struggles for self-realisation in a Denmark struggling with emergence of the industrial revolution and modernism.

I read at least one Holocaust book ever year, it’s important to me to remember, to not forget.  I came across a list of lesser known Holocaust works at the Eiger Monch & Jjungfrau blog (again!) and picked out the novel ‘Götz and Meyer’.

Why this book and not others?  I think the setting, Belgrade, was the reason, I know little about Serbia’s experience of WW2 and even less about the fate of the Jewish community.  The book is narrated by a teacher uncovering the fate of his family, murdered by SS officers Götz and Meyer in a movable gas chamber, an extermination camper van if you like.

20 of the books I read (35%) were written by women , which isn’t bad but also isn’t that great.  The list is dominated by a triumvirate of Elizabeth von Arnim, Sybille Bedford and Iris Murdoch, together they span the entire breadth of the 20th century, it’s interesting think of the three of them meeting for lunch in Paris.

Ebay is a buyers market, crazy prices.  Feel bad about only 8 books from actual, real bookshops, must do better. I’ve almost dropped Amazon entirely, hurrah!  Only one ebook, to hell with ebooks, life is too short.

One thought on “Books read during the first half of 2019”