The Cathar Way is a 250km footpath in the French Pyrenees.  It runs between Port La Nouvelle on the Mediterranean coast to the historic town of Foix.

It’s a well-marked trail, followed by looking out for posts with coloured markings. 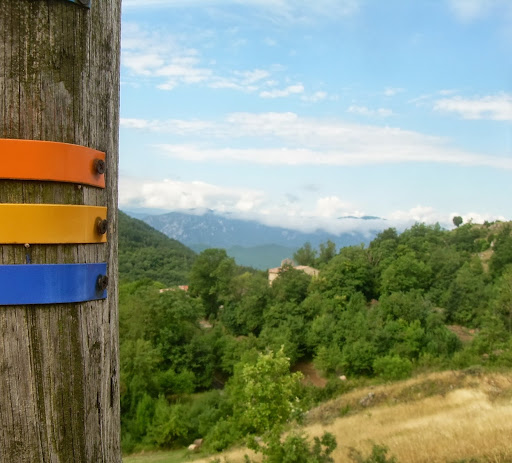 Much of the path is in the foothills of the Pyrenees and takes in many castles and fortifications built by the Cathars between the 12th and 14th centuries.

My hikes on the Cathar Way

My hike was in mid-August (hot!), I walked for four days, starting at the tiny village of Saint Julia de Bec and finishing up in the town of Maury, some 50 km to the east.  I camped two nights and spent the final night in a gite.

It was hot!  Mid August is probably not the best time to go hiking in the south of France but that was the only time I had available.  The secret is to start walking early, between 6.30 and 7.30am, and get the main part of the hike over by 11am.  By midday it became very hard work in the open and I was constantly looking out for shady areas.

The hills are gorgeous at that time of the morning so it’s well worth getting up then anyway.

Davis’ book is PDF-only, which is very handy which meant I could print off the pages I needed and kept the relevant one handy in my shirt pocket.  Much easier (and less weight) than having to continuously flick through a book.

(with thanks to Anne for making it all possible)

4 thoughts on “On the Cathar Way”