This is the fifth stage of the King’s Cross to Birmingham expedition via the Grand Union Canal.

The map below shows the route of the expedition so far, Birmingham remains far off (well, a 100 miles or so) to the north.  The red line shows the hike completed prior to this stage, the purple line shows this stage.

It was cold, overcast and somewhat windy when I set-off again on the trail to Birmingham.

I reached the towpath at midday, after a mile and a half walk from Moor Park tube station.

Arriving this late in the day gave me just five hours to cover 17 miles. I would have to move swiftly if I wanted to reach Tring before darkness set in.

Thanks to the fast pace I’d set myself I didn’t have time to watch narrowboats move slowly through locks, something I enjoy doing usually.  I’ll have plenty of time for that later on in the year when hiking days stretch lazily out into the evening.

I saw a bunch of flowers scattered across the surface of the canal and wondered about the story behind their sad fate. 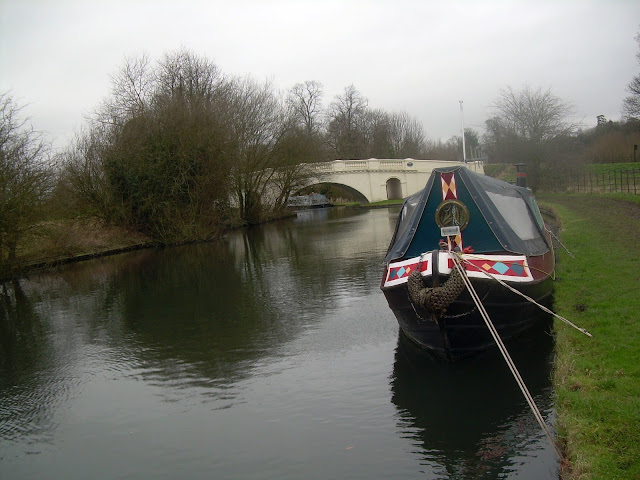 The towpath was very muddy in places and nicely churned up by bicycles.  I had to step, and sometimes leap, over large puddles along the way.

Locks gates act as handy benches for lunchtime feasts.  I devoured a delicious Cornish pastie (made by my local butcher) and wolfed down a tub of bombay mix and nuts.  The tea I had made at home some four hours previously was still hot and very refreshing.

A nearby dinosaur kept a watch on me. 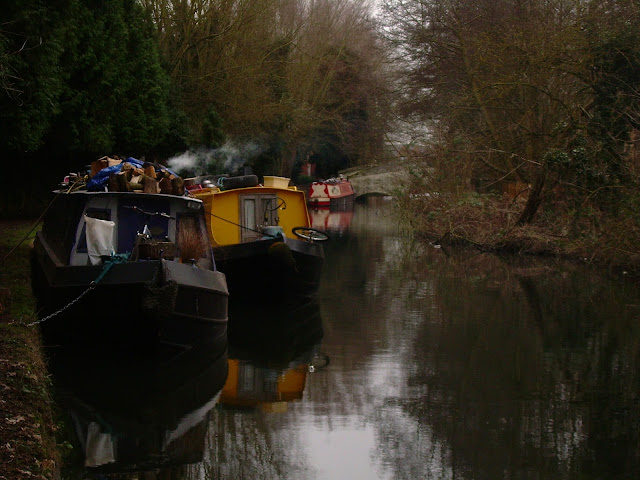 The scenery wasn’t always lovely and this wasn’t helped by the grey day and the sound of cars speeding up and down the A41.  But at times the views were beautiful, breathtakingly so in places. 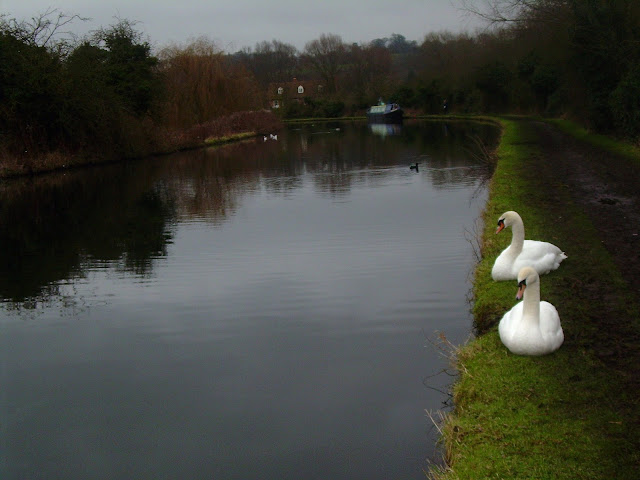 I reached Berkhamsted at around 4pm, leaving me an hour to trudge the final 3 miles to Tring.  It was a bit of a forced march in the end, I really didn’t want to end up on a very muddy towpath after dark, especially as I hadn’t thought to bring a torch (daft!).

From what I could see in the dusk, the countryside looked a delight but I was not able to give it any proper attention.  I’ll have to save that for the next stage, when I’ll arrive much earlier in the day and enjoy a slower hike.

I arrived in Tring just after five and was sitting on a train heading to London 15 minutes later, by that time night had fallen.  From Euston I headed up to north London for a couple of pints of bitter and and an excellent Thai curry.  The perfect way to end a good day’s hiking.

8 thoughts on “King’s Cross to Birmingham via the Grand Union canal. Stage 5: Moor Park to Tring”