There’s nothing quite like going for a hike when it’s snowing.  I love how the countryside is completely transformed, turning everyday agricultural scenery into desolate wilderness (kinda) fit only for the adventurous and foolhardy.

I hopped on southbound train past Cambridge to the ancient market town of Royston, just inside the North Hertfordshire border and really only a stone’s throw (well just over 40 miles) from London.  My destination was Baldock, eleven or so so miles to the south west.

I arrived at Royston just before midday, it was snowing.

I passed various historic buildings and signs.  The Romans were busy here and King James enjoyed a spot of bowling.

The good people of Royston were out on nearby Therfield Heath, sledging and having fun in the snow.

I headed up the hill, which is also on the site of a golf course.

At the top of the hill is the entrance to a wood.  As I walked through the trees I saw a hawk swoop on by, a small bird clutched tightly in its talons.

I left the woods and joined the Hertfordshire Way.

I quickly lost track of the Herfordshire Way signposts but luckily I had my compass with me so set a bearing westwards in the direction of Baldock and continued on my happy way.

For some reason I was surprised to see sheep out and about, not something we have much of in the Fens.

After some wandering I found myself on the Icknield Way.

This section was absolutely beautiful. I would have liked to have stayed on the trail but I really want to do the whole of the Icknield Way from start to finish, rather than half way along its length.  I’ll leave that for another time.

So I left the path, took another bearing westwards and continued on my way.

After a couple of miles of rather dreary road walking I found a footpath to take me the last four or so miles to Baldock.

But first a cuppa tea and chocolate bar under a railway bridge.

The last leg of the walk took me over white fields that seemed to disappear into the white horizon.

Hertfordshire is a county of many signposts. 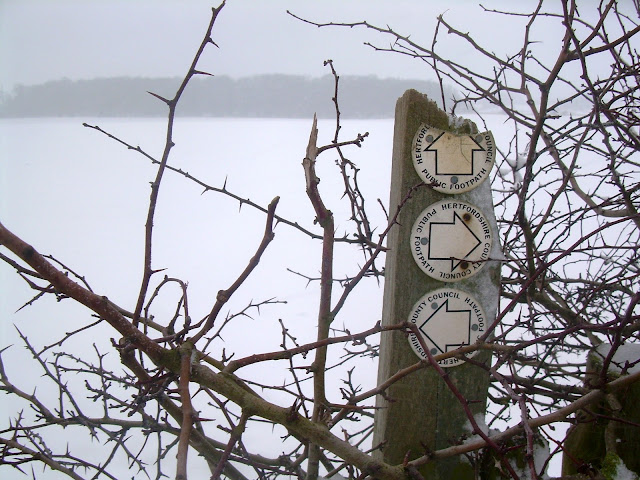 At times it felt hard to believe I was just outside London, this really felt like walking on a desolate moor, rather than the home counties.

The trail took me through Park Wood, home of a number of Roman and Bronze Age barrows (not that I saw them in the snow).

I passed Sonny the horse.

The last mile or so was along a snowy road.  I took my harmonica out and played some blues riffs, It felt like the right thing to do.

I had a short wait at Baldock before catching the train back to Ely. All in all a fine day’s hike in the snowy wilderness of North Hertfordshire.