This is stage five of the Hit The North expedition.

This was something of an epic hike, heroic even, especially as night started to fall. I covered 17 miles across the north of the Cambridgeshire fens to the southern tip of the (relatively) hilly Lincolnshire uplands. The walk took in rivers, woodland, potentially dangerous animals (kinda), trespass and night hiking by compass.

Adventure on a grand scale!  Adventures close to home.

It was a beautiful autumn day as I left Ely for Peterborough.  Due to various delays I arrived in Peterborough at around midday which meant I had only four and a half hours or so of daylight for walking, with this in mind I had a torch in my pocket, just in case.

The walk to the riverside is only five minutes or so from the station.  The river Nene west of Peterborough is a completely different looking river to that of the east of the city.  A wonderful riot of trees and hedgerows showing their autumn colours, birds singing and swooping about.

I was on the Nene Valley Way. 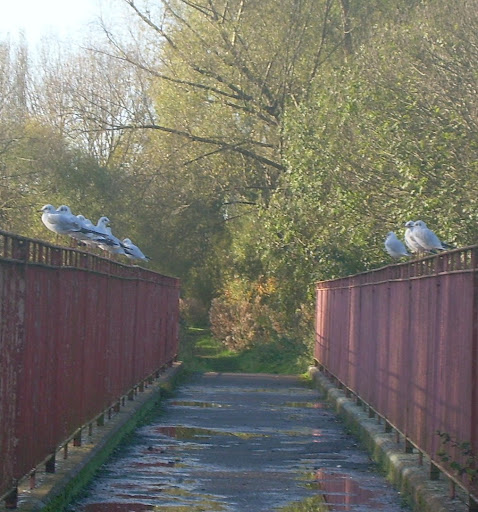 The local council had put in boardwalks along some of the path and benches appeared every now and again. While it was tempting to stop for a bit and enjoy the view, I was very aware of the movement of  the sun to the west.  The walk was going to become a race against time at some point.

Milton Ferry bridge was the landmark that signalled the end of my river walk.  From here the Nene flows on westwards to Northampton where it meets up with the Grand Union Canal. We’ll meet up again at that stage of my King’s Cross to Birmingham canal expedition.

Turning north from the Nene I took the interestingly named ‘Landy Green Way’ to the village of Castor.  The Landy path apparently pre-dates Roman times, the signpost below is probably from that period.

It was here that I noticed contours, (almost) hilly regions.  The road to Castor went down a slope!  This was thrilling for a hiker used to the fenny lowlands. I passed some attractive pubs in Castor (the village even has its own brewery!) but was too wary of the shortening daylight to stop for refreshments.  Instead I sat on a wall and drank from my flask of luke-warm tea.

From Castor I took a footbridge over the busy A47 and entered the Castor Hanglands National Nature Reserve.

And thus I began the woodland stage of my hike.  The Castor Hanglands are lovely and looked lush and verdant in the late afternoon sun. I passed horses grazing…

…and cow/bulls with scary horns.  The one below blocked my way, I took a wide detour around him and his pals, they ignored me.

I stopped for a rest and took a photo of myself…

After forty minutes I arrived at the north westerly corner of the Hanglands, from there it was a short hop across a quiet road to Southey Wood.  I was starting to tire at this point so I sat down and munched my way through the last of my sandwiches.

I looked at my watch, 3pm, an hour and a half of sunlight left. Southey Wood was far busier than the Hanglands.  Families, couples, barking dogs, litter.  I put my head down and picked up the pace, heading to the other side of the wood to a lane I had seen on the map. The lane ran alongside the wood and would take me on to the final stage of the hike.

I arrived at my destination only to find a hedge between the wood and the lane, I hadn’t expected this, another example of the map not being the territory   At this point in the day a hedge was not going to get in the way of me and a pint in Stamford.  I put my head down and burrowed my way on through, dragging my rucksack behind me. Brushing off twigs and other debris, I trundled a mile or so down the lane as the sun began its steady dive into the west.

At the end of the lane I noticed a sign, ‘Private Road’ it announced. I had been trespassing! I began to whistle a Wood Guthrie song, it felt like the right thing to do.

I began the final stage of the walk as the sun began to set.  A Roman road/path would take me three miles across the Burghley House Estate. What did the Romans do for us?  They gave weary hikers arrow-straight paths on which to set bearings.

I devoured my final marathon bar, finished off what was left of my water and exchanged my map for a compass and torch.  Setting my compass I strode off into the gathering gloom. Forward brave legionnaire!  A pint in a Stamford pub is calling!!

I made my way across fields and into woodland.  Walking into a wood at night requires a tiny bit of courage, I think there is something instinctual in us that says ‘uh, no, I don’t want to be here all on my own in the dark’.

I told myself there were no dangerous animals on the loose in Lincolnshire, there was nothing really to worry about other than falling into a stream, twisting my ankle and spending the night going around and around in circles.

I checked my bearings and kept to the path.  Through the woods, across the manicured lawns of Burghley Park, along the side of Stamford golf course.

And then suddenly, I was there.

‘Welcome to Lincolnshire’ announced a sign, ‘Welcome to Stamford’ said another.  I crossed the river Welland into the town and found a pub, the King’s Head where I downed the much anticipated pint.

Stamford looks very pretty and rather posh, it was too dark and cold to hang about and sightsee, that can be done next time.

Next stop: the county of Rutland and town of Oakham.

10 thoughts on “Hit the North! – Stage 5: Peterborough to Stamford”