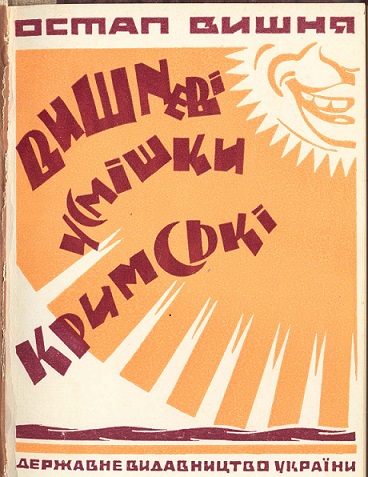 The images accompanied an article, ‘Літо, спека, море‘ (‘summer, heat, sea’) about Ukrainian writers in the 1920s enjoying the delights of holidaying on the Crimean coast.

The covers are from the book ‘Crimean Cherry Smiles‘ by Ostap Vyshnya , (1889 – 1958) a Ukrainian ‘writer, humourist, satirist and medical official’.

Vyshnya was a member of what was later termed ‘the Executed Renaissance‘, the generation of over 200 Ukrainian writers and artists of 1920s and early 1930s who were brutally executed, exiled and repressed by Stalin’s gang.

Vyshnya’s books sold in their millions and he was a much loved writer across Ukraine and the rest of the USSR. Apparently he was very popular with the peasantry, even those unable to read.

Unfortunately, his fame, and ‘jests’ at the expense of the political classes, brought him to the attention of the authorities.

In 1933 Vyshnya was charged with ‘nationalism and plotting terrorist actions against the Party leadership’ and condemned to the gulag for ten years.

He resumed his literary career in 1943 and was rehabilitated in 1955 . He died three years later in Kyiv.

Here’s a quote from Vyshnya’s diaries that gives a good idea of the man:

Give me, Providence, strength, skill and talent and whatever else is needed to make my people, who work so hard, who live in hardship and sorrow, who suffer from uncertainty and doubt, smile!

Even if my people, reading my stories, do not laugh heartily, bless me with a gift to give people creases of a smile instead of furrows of worry on their brow, give me an ability to kindle a little light of joy in their eyes which are filled with grief and gloom.

And if I see such a smile on their faces and such a light in their eyes, it’ll be the best pay for my efforts, and I’ll feel happy in spite of all the hardships I’ve lived through.

On the ‘Welcome to Ukraine’ website you can read an English translation of his short story ‘Hunting Season‘.

Below is an amusing cartoon of Vyshnya in Crimea.

I love this wonderful modernist illustration of the start of holiday season.

A further note on Crimea

When the great Russian people finally chase the tyrant Putin out of Moscow, and hand Crimea back to Ukraine, I’ll visit Yalta, Simferopol and Simeiz.  Until then, I’ll make do with enjoying Ostap Vyshnya.