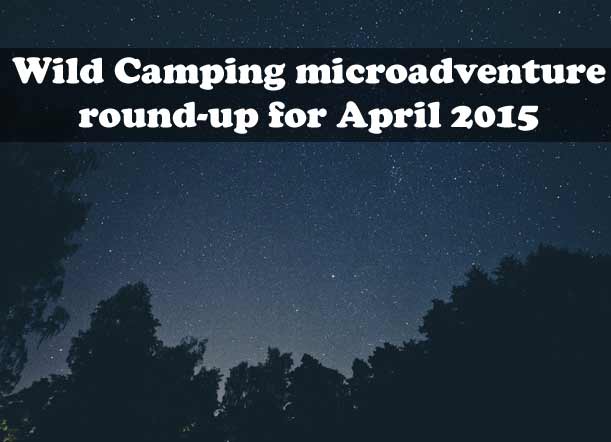 Allysse camped out while hiking on the Vanguard Way that runs from London to the south coast.  In her post she uses quotes from an essay by Robert Louis Stevenson to illustrate her journey, a nice idea.  An audio diary is coming soon as well.

“As the day goes on, the traveler moves from the one extreme towards the other. He becomes more and more incorporated with the material landscape, and the open-air drunkenness grows upon him with great strides” (RLS – ‘Walking Tours’)

James and his friend Karl camped out by Belas Knap, a neolithic long barrow, on Cleeve Hill, near Cheltenham. They enjoyed a couple of ciders while watching the sun go down, that’s how to do it!

Naomi and her husband made their way to Dartmoor for a night out with bivvys.

“We found a spot among the stone row below Sharp Tor…the views of the clear blue sky and down into the valley below were expansive. We pulled out our sleeping bags, mats and bivvy bags ready to settle in to once it was dark and then relaxed with a picnic to watch the sun set.”

Chris combined a wild camp with sharpening-up his bushcraft survival skills by building his own shelter in the woods.

” The woods around me were filled with the songs of chaffinches, gold crests, tits and blackbirds. The reassuring sound of the fire crackled and spat away whilst warming my feet. At that moment I wouldn’t have wanted to be anywhere else”

Jacqui, her husband and dog camped out in the foothills of the Majella of south-central Italy. Amongst other things they enjoyed a fabulous looking fried breakfast, oh my!

“A very average weekend suddenly became the best weekend ever, and one that we’ll remember forever”

Maxine took her bike for a solo wild camp on the Norfolk coast.

Anita spent the night in a Peak District cave after a hard day’s mountain biking over the hills.

“We lay on our sleeping bags and watched the world go by.  We drank beer and wine and chuckled about all those tucked up in bed missing out on the greatest adventure ever!’”

Nigel took to his canoe for a microadventure wild camp on the Caldon Canal, near Stoke-on-Trent.  He shot a nice video and wrote up a blog post.  A canoe wild camp is most definitely on my list of things to do this year!

Over in Ireland, Stu camped out beside a lake.

“I pulled out my sleeping bag, climbed in and was immediately greeted by a feeling of relaxation and joy…I laid in my sleeping bag listening to the quiet lapping of the water nearby I knew I had made a good choice. I lay there feeling the cool breeze on my face and soon drifted off to sleep.”

Tim and his mates Matt and Alex, went to the woods of Greenham Common in West Berks for a night under the stars.

“We set out our beds for the night.. We spent some time chatting, enjoying a few drinks and looking up to the clear skies. the International Space Station made a silent pass over the top of us along with numerous satellites and aircraft.”

Graham set off on a last minute wild camp on Winter Hill, to the north-west of Bolton

“If you’ve got a sleeping mat, a reasonable sleeping bag, and can find some cash for a bivvy bag, I heartily recommend this approach to kicking off your weekend!”

Charlie camped out in a wood while cycling on the Capital Trail up in Scotland near Edinburgh.

“As darkness was beginning to fall I chose to bivi there on a very comfy bed of pine needles.”

Clare took her family off to the excellent Wicken Fen wild camping site.  I camped there back in February, it is a fantastic place. Clare also managed to get a spot of geocaching in, impressive!

“As darkness fell it was time to explore. Armed with torches and a bat detector, we set off across the fens in search of bats, bugs and creatures and hopefully keep clear of the ghostly Monks, marching Romans and black hounds which according to legend stalk the fens by night. Spooky!”

Lee and his friend Andy cooked up a dinner of Thai chicken curry in a local wood.  Curries are always good but in a wood at night…sublime.

I took my son, his mate and his mate’s dad on a bushcraft weekend in the woods of west Norfolk. The boys learnt how to make fires and carve wood while the dads lazed around in hammocks and knocked back a few beers.

Did you manage a microadventure wild camp in April? Do you have one planned for May?

Let me know in the comments below!