At the start of the year, Alastair Humphreys, in his post ‘Your Year of Microadventure‘, called for people to live more adventurously in 2015, and challenged us to spend one night out in the wild each month during the year. 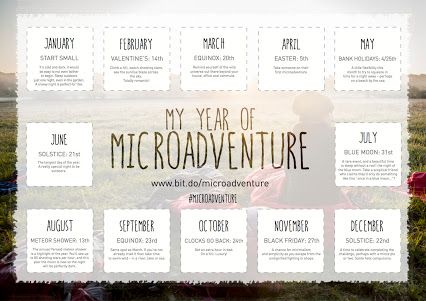 Since that call to arms I’ve noticed a rise the number in great blog posts, videos and photos of people venturing out and spending nights in the open, under the stars and moon.

If you think I’ve missed anyone out, or would like your blog/video/photo included, then please leave a comment below.

Steven managed to get in TWO wild camps on the snowy hills of the Scottish Borders.

I particularly like his powerful black and white photography taken in the midst of a snow storm, it sounds like it was a pretty dramatic camp!

Allysse’s wild camp was at the other end of the scale but in no way any less of an adventure.  She bivvy’d the night in her local park, waking to frost on her boots.

What I particularly like about this post was the audio she included, so we can actually join her on the camp, great stuff!

Bethan decided to camp out after talking about microadventures in a pub.  Most plans discussed in pubs end up quickly forgotten but not for Bethan.  A few nights later she and a friend were sleeping in the light of the moon on a hill overlooking Cardiff.

Stuart chose Plover Hill in the Yorkshire Dales for a microadventure with his friend Pilgrim Chris.

This is another gorgeously snowy camp and the post has some lovely photos.  Stuart reports that the night temperature dropped as low as -8C!

Jon and Harry spent a night in local woods near Bishop’s Stortford, they also managed to get in the local paper!

Check out their video:

Rob and two friends spent the night on Pewley Down near Guildford in Surrey.

From the post it sounds like they had a good supply of quality whisky on hand to enjoy before bedding down.

The final sentence made me laugh: “I was pretty spaced out during the morning, not sure if that was due to sleeping out or the 5 pints and multiple whiskies. All in all this was a great success”

That’s the way to do it!

Adrian and James are cycle-microadventurers and camped out while riding from London to Chichester.

After a pint at the village of Chiddingfold in Surrey, they found a nearby spot, downed a bottle of red and enjoyed a night bivvying under the stars.

Well…I had a wild camp planned and organised for the last weekend in January, a night out in the wilds of the Cambridgeshire Fens.

And then, on the night before the camp, I fell ill with a horrible virus that knocked me out for the next week.  So…I’m already behind on this, I’ll make up for it by wild camping twice in one month, promise.

Any plans for a wild camp microadventure?  Tell me all about it in the comments below!