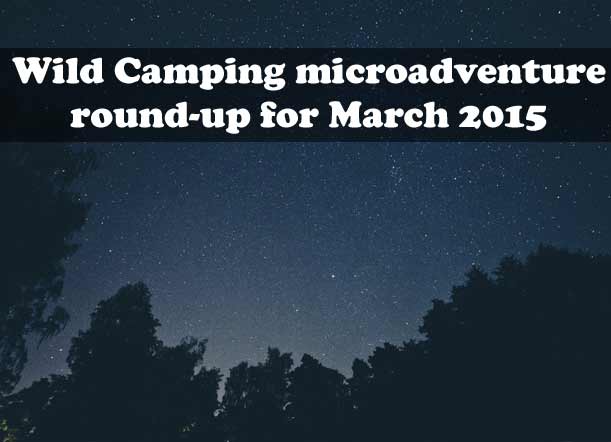 Allysse took to the woods of Hertfordshire (a much underrated wild camping county IMHO) for her microadventure.

Allysse has included some audio of the camp on her blog, it brings you right up close to the camp, don’t miss it!

“In the morning an orchestra from nature woke me. Unseen birds sang in the trees. From a distance, ducks and coots added depth to their melody, and a pheasant stole the show with his solo cry. I slowly opened my eyes and unzipped my bag to brew a first cup of tea. The night had been warm and good.”

Stuart and Chris headed up to the Pennines, staying the night in a secret location:

“As we dropped down the weather worsened considerably, the wind rose and it began to rain. I diverted us to a shooting hut I knew about, to wait out the worst of the weather”

Meraid and Dan took their bikes to the Isle of White, finding a pitch overlooking the sea:

“Fog rolled in as we pitched camp, drenching the grass and chilling the air. I crawled inside and waited for dinner. A sliver of crescent moon appeared as the fog dissipated. Stars shone in a charcoal sky…”

Chris spent the night in an old watch tower on the Finnish – Russian border. Yes, you read that correctly, the Finnish – Russion border. And from his camp he watched the shimmering northern lights. Me, envious? Most certainly! Impressed? Most definitely!

“I felt a bid giddy with child-like excitement at the thought of sleeping in an old rickety watchtower so high above the ground.”

Ellie and friends camped out on a hill overlooking Cardiff and sort-of saw the eclipse in the morning.

“I felt like a child again giggling at the silliness of what we were doing and where we were sleeping. “We’re all mad here!”

Maxine went on THREE wild camp microadventures in March, one in a wood and two on a beach (one of which was with Anita, see her report below), which is pretty damn impressive in my book!

“We parked and carried our packs to the hill, the red sky remained, and ducks were beautiful silhouettes on the tide ponds. The sounds of the sea birds, distinctive and so completely different to the garden birds at home….Otherwise silent. Not a soul.”

Anita and her dog, Mocha, joined Maxine for a cheeky wild camp on the porch of a couple of beach huts on the Norfolk coast

“We got up around 7:30…and headed back along the road with our packs on our backs. Secretly I wanted to see people so I could say ‘ yeh i did sleep on the beach…..I know I’m cool ….and a little nuts!’”

the Norfolk Facebook microadventures group (of which Maxine, Anita and I are all members, is on fire at the moment with all this wild camp adventuring!).

The Bimbler kept warm in his tent with an interesting looking heating contraption (and took some rather good photos).

Over in Ireland, Stu Ind camped out in the Wicklow mountains

“I love camping and the low temperatures contrasted the warmth and safety I felt inside my bag as I looked out at the stars, igniting the childlike excitement within me and I soon dropped off to sleep, happy and satisfied with my evening”

Ollie and a friend pitched up in a wood for the night.

“The weather was perfect; no cloud cover meant it was pretty nippy but we could bed down underneath the stars, not a view you often get to fall asleep to”

A certain Alastair Humphreys went up to a wood on a hillside for his March camp.

“It’s the start of spring and those lovely long, light days. So I headed out to sleep on a hill. I made a little fire, cooked a steak, drank a beer or two, and slept under the stars.”

Jonathan spent the night in a wooden three-sided shelter.

“Night has fallen; we walk towards the moon, a hazy crescent hovering between bare tree branches. I clutch a torch in my fist, letting a few speckles of light fall between my fingers.”

Emma’s went on her first ever wild camp in Chisbury Wood, Wiltshire.

“I found my sleeping spot, rolled out my mat, got into my sleeping bag, lay down, and listened. Nothing. Not even the sound of a car in the distance.”

I spent a lovely night in Thetford Forest, my new winter sleeping bag keeping me snug and warm. I also camped out in a field with my son and his pal, they stayed in a Polish army lavvy tippi while I luxuriated in a hammock

“Tea and muffins in bed, in a forest, a fine thing to do on a Sunday morning”

Did you manage a microadventure wild camp in March? Do you have one planned for April?

Let me know in the comments below!