Stuffed away in a cupboard in my house is a box of vinyl 45s. Many of these singles are absolute classics and unavailable on CD. This is a poor situation and I’m determined to do something about it. 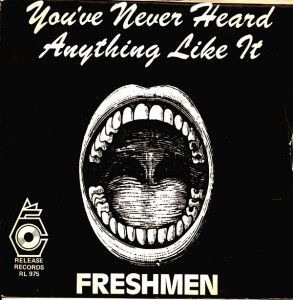 The first single is called “You’ve Never Heard Anything Like It” and is performed by The Freshmen, an Irish ‘showband’.

The single was released in 1979 and was quickly picked-up by John Peel, who played it many times, becoming one of his favourite singles. I heard the track thanks to Peel and found it in a cheap singles box for the princely sum of 10p.

It’s a swinging little number about a bored, fed-up teenager complaining about his family to an agony aunt. Full of lovely lines and a great chorus that you’ll soon want to join in with.

The Irish Showbands website has this about The Freshmen:

“Though they featured the classic showband line-up and they played for dancers in ballrooms throughout Ireland, the “showband” tag didn’t sit lightly on the shoulders of The Freshmen from Ballymena. More than most bands, they epitomised the divide between urban and rural Ireland, drawing their biggest crowds in cities like Cork, Galway and Waterford….”

According to one source, the single got as high as 17th in the Irish pop charts!

So, here it is: The Freshmen – You’ve Never Heard Anything Like It

The Freshmen – You Never Heard Anything Like It (MP3 3.8 mb)

Go on, download it. Play it, play it again and again. It’s a wonderful single. Any comments?

Oh yeah, just noticed, they also have an entry on Wikipedia.

5 thoughts on “Great Lost Singles: The Freshmen – You’ve Never Heard Anything Like It”