I walked this, the second stage of the Great Ouse cut-off channel expedition, in May 2013.

I joined the Great Ouse Cut-Off (or ‘Relief’ as it’s also known) Channel at Downham Market at 6pm one mild Tuesday evening in May.

The Cut-Off Channel is a man-made waterway who’s job it is to divert water from the River Great Ouse when levels start to rise.

The Channel flows down to Lakenheath, some 20 miles or so to the south before going underground until it reaches Essex, where it empties out into a reservoir.

While the Channel cuts through privately-owned farmland, the actual banks (channel-side that is) are maintained and managed by the Environment Agency (EA).

The EA is a government body, paid for by me out of my taxes, so as far as I’m concerned I can hike on the land.

Is the land actually open for anyone to walk along?

Well I had to climb over a fence and scramble through some barbed-wire but there aren’t any signs saying entry is forbidden.

Though some things ARE forbidden…

No, no, no…but what about walking? (And just what is the difference between ‘swimming’ and ‘bathing’?). The horses along the way didn’t care about any daft signs…

The banks of the Cut-Off Channel are a delight to walk along.  A gorgeous riot of lush green everywhere you look.

Trees line the banks, lovely grassy pathways to stroll along and no litter anywhere.  Very little sign of anyone else about at all. Wonderful! 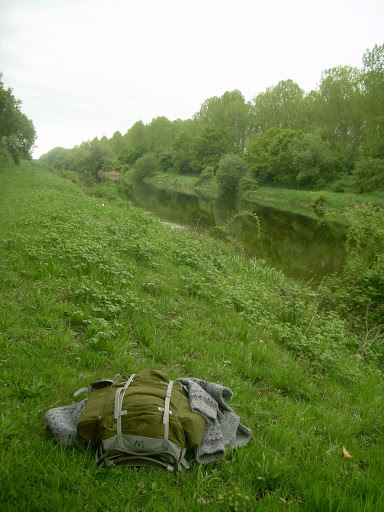 I shot a short video clip:

I saw rabbits and deer…

I stopped for a while on a farm-bridge and gazed down the channel.  So hard to believe there was no one else about in such a beautiful place.

Eventually, after 10 miles, I reached the point where the Cut-Off Channel meets the River Wissey. On the photo below, the red pin is the Channel, the blue pin the Wissey and the green icon my wild camp.

The Wissey actually crosses the Channel on an aqueduct and I would have liked to given it a proper inspection but the light was fading fast (9pm) and I needed to find a pitch quickly.

I couldn’t get as close to the river for the camp as I would have liked.  The banks of the Wissey were covered waist-high in stinging nettles and I didn’t have the time to trample down a spot for the night. Instead I found a place on the side of the path.

It was almost dark as I set up camp, I pulled out my head torch and discovered the useless thing was broken. Luckily a break in the clouds gave the moon a chance to show herself and I suddenly had enough light to get myself sorted and into my sleeping bag.

I ate a Cornish pasty and sipped on a miniature bottle of scotch.  The moon was out, the stars twinkled above me, life was good.

I awoke at the crack of dawn.  I had slept in relative comfort, my sleeping bag cushioned by trampled grass.

I made a cuppa tea, ate some cake and watched the sun come up over the bank.

Shortly before 6am I was on my way…

…and soon had my first daylight view of the Wissey.

The rest of the walk was a lovely stroll along the river. Past the sugar factory…

At one point I saw some movement in the reeds by the river and suddenly, before my eyes, I spied three young otters playing together.  I watched them, spellbound for a good minute or so before they scurried off into the river.

After 7 miles I reached the village of Hilgay where I left the Wissey and took the bus back to Downham Market.

I headed straight for the wonderful Railway Arms cafe/bar/pub on Downham Market station where I devoured an egg and bacon sandwich.

A perfect end to a wonderful wild camp out in the fen wilderness, an adventure close to home in its truest sense.