The photo is by Austin Charron, taken in December 2008. 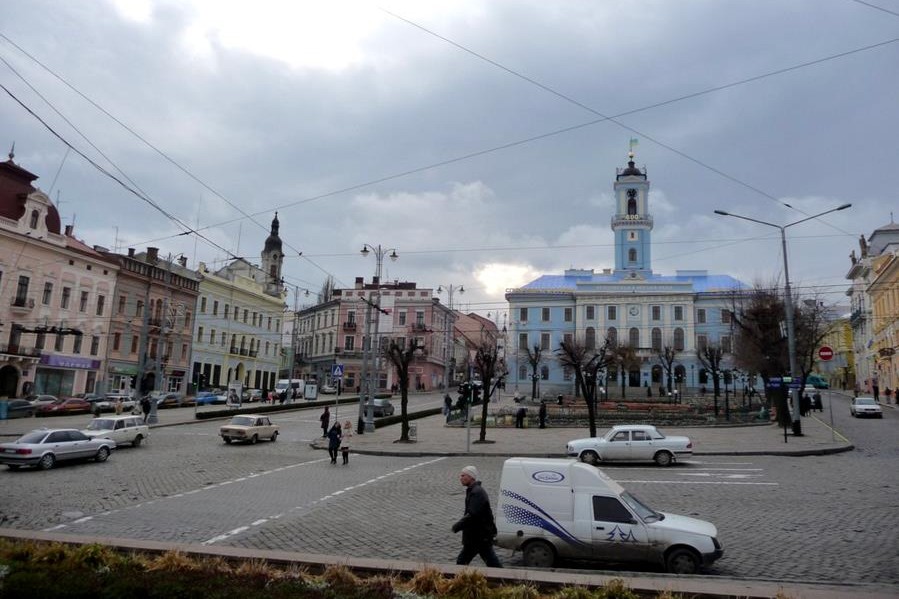 Central Square is the heart, the hub, of Chernivtsi and the home of the city council.  The Austrians named it Ringplatz which can be translated as ‘Market Square’

In 1940 the incoming Romanians renamed it Piata Unirii (Reunion Square).

After the war, the Soviet authorities called it Red Square, and added a statue of Lenin.  In 1949, the local council changed the name to Central Square and removed Lenin at the start of 1990s.

In 2004 a new tradition was started whereby midday. a trumpeter appears on the balcony of the town council and plays the folk song ‘Marichka’.

Marichka
Like a snake there coiling, is a restless river,
Flowing oh so closely to the mountain foothills.
And there on that bank, does live my Marichka,
In a house that’s hidden, in a green glen there.

From the house she comes out, stands there on the threshold –
Her beauty there so shining the breath of the river.
And if she should smile, yet throw a glance out at me:
“Do jump into the water” – so say all my friends.

Do not ask me, oh boys, why I am so lonely
Here walking the bank so late and so silent.
For across the river there I’ve lost my peace
And I can not find the road to get out there.

So do laugh at me, oh you restless river
All the same to the other side I will find a way:
“Do you hear, or don’t you, oh charming Marichka,
I will pave a pathway there out to your heart.”